Written by
Fiona
Posted in
books

Flower Cabin is a fecund little book, a story by Jeff Grimes translated to the Chinese by Cain Zhang. Thoughtful and idiosyncratic typesetting was done by Cameron Leggett amid a cheering crowd and dodging the perils of multiple editors in two languages. The book was designed by Jeff, Sophia Kidd, Cameron, and Fiona. Cameron fractured his elbow during the print run, so Jeff and a kind neighbor stepped in to lift the heavy chase to the C&P and take some of the physical burdens. The project thrived in frenzy to be completed in little over three weeks for the “Bad” exhibit curated by Sophia at Art City Ventura. 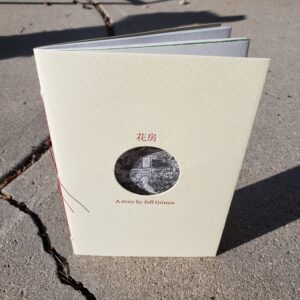 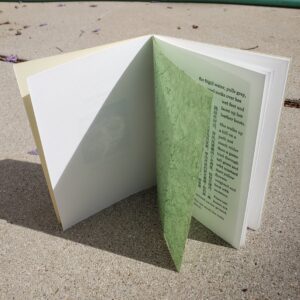 Other photos of the book can be viewed amid Jeff’s writing projects.

specializing in small, hand-made editions of literature and art